This piece is featured in the 2015 Castan Centre Human Rights Report. We will be featuring the articles on the blog throughout the month of May.

Since the Abbott Government’s election in 2013, it has used a military-led response to stop asylum seekers trying to reach Australia by boat. ‘Operation Sovereign Borders’ includes offshore processing of asylum seekers, the interception and towing back of boats and a high level of secrecy about these operations. 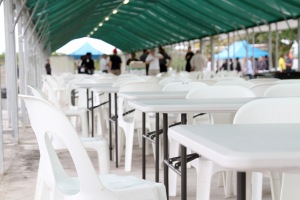 The Abbott Government has declared that it will no longer process and resettle asylum seekers arriving by boat. These irregular maritime arrivals are sent to ‘regional processing centres’ in Nauru and on Manus Island in Papua New Guinea (PNG).  These centres were first used as part of the Howard Government’s Pacific Solution and were re-opened by the Gillard Government in 2012.

The Abbott Government has maintained that those processed at Manus Island and granted refugee status will be resettled in PNG despite high levels of local animosity and the extraordinary level of violence directed at detainees, largely by PNG police and locals employed at the facility during the February 2014 riots (see below).

Some refugees have been processed and then permanently resettled in Nauru, where they are reportedly isolated, suicidal, living in fear of violent attack by locals and unable to access basic necessities such as food and water. Since a September 2014 agreement between Australia and Cambodia, refugees on Nauru have had the option of resettling in Cambodia but so far none have taken up the offer. PNG, Nauru and Cambodia each face significant socio-economic challenges, raising concerns about refugees’ ability to integrate and find employment.

Counting the cost of offshore processing

In both Nauru and PNG, asylum seekers are detained for indeterminate periods in crowded and harsh physical conditions, with limited access to health care and essential services. The status determination process has been marked by long delays, uncertainty and inconsistent information.

High rates of depression and self-harm have been reported in both facilities. In Nauru, children detained alongside adults have witnessed numerous acts of self-harm such as lip-sewing and have even engaged in such conduct themselves. In the report of its National Enquiry into Children in Immigration Detention (2014), the Australian Human Rights Commission observed that children detained in Nauru ‘are suffering from extreme levels of physical, emotional, psychological and developmental distress.’ Further concerns have arisen about hygiene, infection control and access to medical services. In October 2014, 24 year old Iranian asylum seeker Hamid Kehazaei died from a heart attack after contracting an infection on Manus Island which remained untreated for several days.

Allegations have been raised of sexual abuse of detainees at both regional processing centres, including children in Nauru. Protests have become a feature of life in offshore detention. In February 2014, protests and rioting on Manus Island led to two days of mayhem and brutality during which more than 60 detainees sustained serious injuries, including bullet wounds, broken bones and machete wounds to the head and neck. Twenty-three year old Iranian asylum seeker, Reza Barati, died from severe brain injuries sustained when a number of centre staff punched and kicked him, beat him with a nail-embedded wood plank and struck him repeatedly in the head with a large rock. Tensions have persisted in both centres. In December 2014 and January 2015, up to 700 men detained at Manus Island participated in hunger strikes with some sewing their lips together.

Tow-backs and detention at sea

A key element of Operation Sovereign Borders is the interception and towing back of boats to the edge of Indonesian territorial waters.

When tow-backs were used under the Howard Government, they raised serious concerns about Australia’s compliance with its human rights obligations and its obligations concerning safety of life at sea. Under the current government, boats have been intercepted and their passengers discharged onto small orange life boats and moved beyond Australian waters. Due to government secrecy, few details of its tow-back operations have been released.

In June 2014, Australian Maritime Officers in the Indian Ocean intercepted a boat from India carrying 157 Tamil asylum seekers and detained them on an Australian customs vessel for almost a month following the Australian Government’s decision to return them to India. In January 2015, the High Court decided (by a 4:3 majority) that detaining them at sea for the purpose of taking them to a place outside Australia was lawful and that there was no obligation to afford them procedural fairness. In reaching its decision, the court interpreted the relevant domestic laws. Australia’s international obligations, including those arising under the Refugee Convention, had no bearing on the final outcome.

Because of its determination to send a clear message of deterrence to asylum seekers arriving by boat, the Australian government has used extraordinarily harsh measures which are fundamentally inconsistent with human rights.

The Castan Centre’s 2015 Annual Appeal is on now. Can you choose to support us with a donation?