Our Federal government is committed to promoting greater ‘freedom’. We have a new ‘Freedom Commissioner’, Tim Wilson. And, writing in January, Attorney General George Brandis described ‘freedom’ as the ‘most fundamental of all human rights’.

What does “freedom” mean? 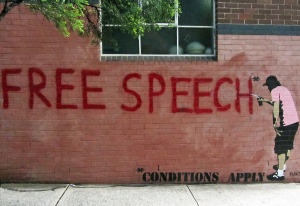 But … freedom of what? Freedom to what? Freedom without an accompanying noun (like “speech”) is virtually meaningless. Certainly, the government does not uphold all freedoms. It does not for example support freedom to marry a same sex partner, freedom to die with dignity, or freedom from random spying by a friendly foreign government.

The type of ‘freedom’ espoused by Brandis and Wilson is the classical ‘freedom from’ the government, where human activity is ‘regulated’ by voluntary interactions in the free market rather than by the State. And indeed, ‘freedoms from’, otherwise known as ‘negative rights’, are an important aspect of freedom and human rights.

But there are other important aspects to freedom. There are ‘freedoms to’ do the things that one wants to do. It is easier to do such things if one is rich, but harder if one is vulnerable or disadvantaged. The market does not fairly allocate such freedoms among people, as it pays no attention to pre-existing power relations and capabilities. Such an approach to freedom, if adopted exclusively, protects the strong but offers far less for others.

Therefore, the government must sometimes take positive steps to protect and promote freedom. For example, the government must protect one’s rights and freedoms from being infringed by another. That’s why anti-discrimination law prevents people from being deprived of opportunities (e.g. in the workforce, in the housing market) on irrelevant grounds, such as race or gender. Further, governments must provide for certain rights when a person cannot do so for themselves. For example, welfare prevents marginalised people from living in grinding poverty in this very wealthy country. Freedom from want is crucial.

The freedom debate has focused on section 18C of the Racial Discrimination Act, which renders certain types of racist speech unlawful. Conservative columnist Andrew Bolt fell foul of section 18C in 2011, and became a cause celebré for those who want the law repealed. But Bolt hardly lacks freedom. He has immense capabilities to trumpet his views across the media, as well as privileged access to people in power. His ‘silencing’ has been very loud indeed.

The government’s proposed amendments weaken controls on racist speech, but they still purport to ban racial vilification and intimidation. However, proposed defences are so broad as to protect all hate speech in public discourse, so that the new bans would be effectively confined to neighbourhood disputes. Yet hate can marginalise and silence, regardless of its source. Words can hurt. And harm another’s freedom.

Restrictions on racist language are not even close to the gravest threats to freedom in this country. Far more concerning are overbearing defamation laws and Orwellian restrictions on freedom of association in Queensland.

In Victoria, police have greater powers to move on protesters, partly to protect business rights to trade without hindrance. Protection of commercial freedom is being enhanced at the expense of democratic political freedom. But demonstrations are a key means by which ordinary people engage in political action. Few have the same capacities as Bolt to make their views heard by other means.

Another way for ordinary people to voice political concerns is through boycotts. For example, artists withdrew from the Biennale of Sydney in protest over its connection to Transfield, which runs Australia’s offshore detention centres. Ultimately, the Transfield connection was terminated. Arguments can be made over the effectiveness and appropriateness of the Biennale boycott. However, the Attorney-General responded by directing the Australia Council to cut funding to arts groups which ‘unreasonably’ refuse corporate sponsorship. Is the Attorney General creating a right for corporations to inflict its brand on others, or an inalienable right to sponsor? Artists should be free to refuse sponsorship on political or ethical grounds. Art is not apolitical: the best is opinionated not cowed.

The conditioning of government funding on depoliticised behaviour by recipients is inimical to ‘freedom’. It leads to a skewed public sphere of debate: the privately funded have enormous freedom to express opinions while the publicly funded are muzzled. Furthermore, freedoms of capital are again favoured over other freedoms, here freedom of conscience for artists.

A final example of business freedom perhaps outranking other freedoms arises with regard to copyright. Copyright protection in Australia is out of date. Our law fails us in the new frontier for freedom of speech, its application in the digital age. For example, many ‘shares’ on Facebook unwittingly breach copyright. Recognising this, the Law Reform Commission recommended the adoption of a more flexible defence of ‘fair use’ to copyright infringement. The Attorney General’s response indicates that he sides with content-holders, meaning no change.

Australia’s freedom debate is dominated by a narrow, inconsistently applied definition of freedom. It is ,bizarrely, focused on the freedom, ‘to be a bigot’. Real freedom is far more complex. And real freedom will be jeopardised unless that complexity is recognised and respected.

This piece is featured in the 2014 Castan Human Rights Report. You can read the full report and download a pdf here.

Chris Berg, In Defence of Freedom of Speech (IPA, 2012) http://www.indefenceoffreedomofspeech.org.au/

One response to “2014 Castan Human Rights Report: The “freedom” debate”